To order copies of The Death of Raymond Yellow Thunder on Amazon, click HERE. For signed copies, send a message on the Contact page.

The long-intertwined communities of the Oglala Lakota Pine Ridge Reservation and the bordering towns in Sheridan County, Nebraska, mark their histories in sensational incidents and quiet human connections, many recorded in detail here for the first time. After covering racial unrest in the remote northwest corner of his home state of Nebraska in 1999, journalist Stew Magnuson returned four years later to consider the border towns’ peoples, their paths, and the forces that separate them. Examining Raymond Yellow Thunder’s death at the hands of four white men in 1972, Magnuson looks deep into the past that gave rise to the tragedy. Situating long-ranging repercussions within 130 years of context, he also recounts the largely forgotten struggles of American Indian Movement activist Bob Yellow Bird and tells the story of Whiteclay, Nebraska, the controversial border hamlet that continues to sell millions of cans of beer per year to the “dry” reservation. Within this microcosm of cultural conflict, Magnuson explores the odds against community’s power to transcend misunderstanding, alcoholism, prejudice, and violence.

The Nebraska Literary Heritage Association, in partnership with the Nebraska State Historical Society and the Nebraska Library Commission, chose The Death of Raymond Yellow Thunder: And Other True Stories from the Nebraska-Pine Ridge Border Towns for its list of Nebraska books that “represent the best literature produced from Nebraska during the past 150 years” to mark the state’s sesquicentennial in 2017.

“Omaha native and journalist Stew Magnuson expertly weaves together threads of sound historical research with social mythology and contemporary politics to produce an intriguing historical overview of the shared fate of Nebraska’s Sheridan County and the Pine Ridge Reservation of South Dakota … This is an extremely well written and engaging work.”

The Death of Raymond Yellow Thunder

And Other True Stories from the Nebraska-Pine Ridge Border Towns 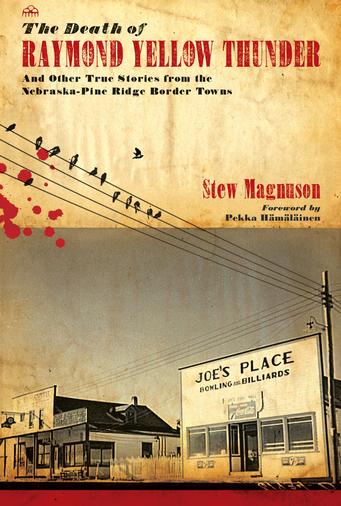