Read more at the HIGHWAY 83 CHRONICLE blog at this LINK

Descending 1,885 miles straight down the center of the United States from Westhope, North Dakota, to Brownsville, Texas, is U.S. 83, one of the oldest and longest of the federal highways that hasn’t been replaced by an Interstate.

In 2009, I woke up in the middle of the night with an idea fully formed in my head that I would write a book about Highway 83 and the history found along it. While the  subconscious mind works in mysterious ways, it was not a random idea. My grandparents had lived their whole lives along Highway 83 in the town of Stapleton, Nebraska, and I always knew that there was something special about this road, namely that it ran from border to border.

By September of that year, I was at the border at Westhope, on the first of two research trips down U.S. 83. I made it Interstate 70 in Kansas on that trip. The following year in May, I finished the journey and traveled to Brownsville, Texas.

Originally, I planned on writing one book about my experience, but fatherhood and other events slowed progress down. I decided to release it in three parts. (If novelists can do trilogies, why can't nonfiction writers, I figured.) The Last American Highway: A Journey Through Time Down U.S. Route 83: The Dakotas, was released in 2014 and the Nebraska-Kansas-Oklahoma edition in 2015. And finally, the Texas edition was published in 2017.

To order signed copies, send me a message through the Contact page. Or order at AMAZON.COM at this link!

For Travel Tips and more about Highway 83, check out my U.S. Route 83 Travel Page at this Link 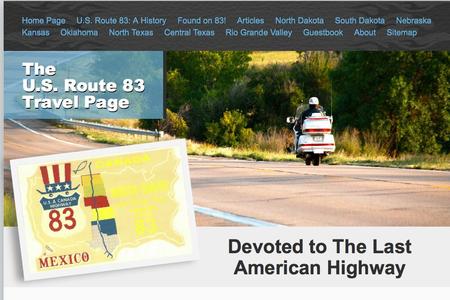