To order The Song of Sarin in paperback or Kindle on Amazon, LINK HERE. Or go to the Contact page to order directly from Stew Magnuson 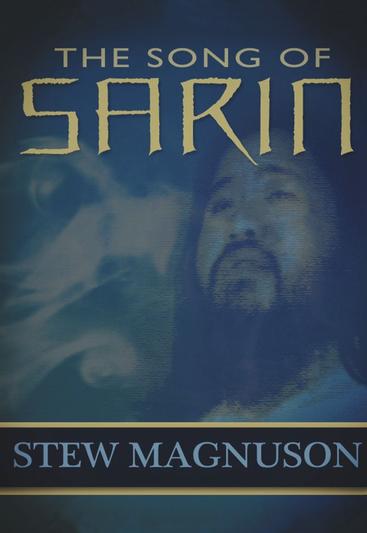 The Song of Sarin

To order The Song of Sarin in paperback or Kindle on Amazon, LINK HERE. Or go to the Contact page to order directly from Stew Magnuson

I was not a victim of the March 15, 1995 subway gas attack in Tokyo. But I could have been.
At the time, I was an international vagabond, teaching conversational English in whatever Asian country looked interesting to me. I had returned to Japan for a third time to look for work, and ended up in a crummy little school owned by a crazed Singaporean woman who needed a native speaker of English to tutor her students.
I had Mondays off, and I wanted to leave teaching and get back to journalism, or some writing related profession. So I would often go into the center of Tokyo for job interviews. I lived and worked in Adachi Ward, the farthest district from the city center.
I didn’t have any interviews set up for that morning fortunately. But it was my habit to wait for the rush hour to die down, and to head off to the more interesting neighborhoods on my day off. Luckily, that morning I turned on the television.
What I saw was horrifying. Victims of some kind of gas were spilling out of subway entrances all over the center of Tokyo. I did not understand Japanese very well, but I had pretty good idea of what was happening. Only a few weeks before, I had read an in-depth article in the English-language Tokyo Journal about an alleged poison gas accident in the mountain town of Matsumoto the previous year. I had read that this incident may have been caused by the mixing of pesticides found in a garden shed that was owned by a retired chemical company salesman. Eight died and hundreds more injured. It was plausible, and like many in the public, I believed it, and didn’t give it much thought.
The article, though, said it was much more likely the work of a secretive cult, Aum Shinrikyo, which had a motive to attack the village. The alleged perpetrator simply did not have the chemicals and expertise to make sarin, a nerve gas first developed by the Nazis. While his wife was in coma as a result of the attack. The police made his life into a living hell as they continued to call him a suspect.
Now, gas had been released in multiple trains, suggesting a coordinated attack.
Needless to say, I wasn’t going into the city center that day. Instead, I watched TV all day as the reports of deaths and serious injuries mounted. The media coverage was nonstop. Many of my students commuted to jobs in Tokyo, and some of them caught whiffs of the gas. None of them were seriously injured.  They all had stories of friends and family members who were victimized.
It turned out that the police had been letting the cult literally get away with murder for years. A partially blind guru, Shoko Asahara, had amassed a fortune, and managed to attract young, educated followers who believed in his apocalyptic vision of a future where everyone but members of the cult would perish, and they would remain to rebuild the world. This was an activist doomsday cult. It wasn’t waiting for the world to end. It wanted to make it happen. It had amassed enough chemicals to kill every man and woman on the planet. (It never devised a way to deliver them, though.)
The idea to write The Song of Sarin came to me several years later after I had retired as a world traveler and returned to journalism and the United States. You don’t live through something like that without it sticking in your subconscious.
Those who are familiar with the incident know that Aum Shinrikyo cultists released sarin in five subway lines as they were arriving at the seat of the Japanese government during rush hour. What isn’t as well known is that the cult intended to attack six trains, but it hadn’t mixed up a large enough batch of the nerve gas.

The Song of Sarin imagines that six trains were attacked. Junichi , or Siha, is the fictional sixth terrorist.
Other than the invented characters and the incidents surrounding them, The Song of Sarin is quite factual. The major cult figures in the novel are real people, and the horrific crimes they committed in the name of the guru in the novel actually happened. I wanted to get into the mind of an ordinary person who was brainwashed into murdering innocents. I read several academic studies. Among them: Religious Violence in Contemporary Japan: The Case of Aum Shinrikyo by Ian Reader; Destroying the World to Save It by Robert Jay Lifton and Aum Shinrikyo and Japanese Youth by Daniel A. Metreax. The renown Japanese novelist Haruki Murakami wrote Underground, an excellent nonfiction book focusing on the victims of the attack rather than the perpetrators. Shoko Asahara wanted to spread his message to the world and had many books published in English. Just about every word of his dialogue in The Song of Sarin came from his own writings, which I tracked down on used book websites.

Finally, while writing the novel some five years after the incident, I was frustrated that I didn’t know the Chiyoda line or the neighborhoods where the attackers would have boarded and alit from the train if it had been attacked as originally planned. I informed my editor at the publication I worked for at the time that I was going to Tokyo for a vacation, and I would write him some articles if he would spring for the plane ticket and some expenses. He agreed, and so I was able to return to Tokyo to ride on the Chiyoda line and imagine what it would have been like to be in that car as nerve gas slowly overtook the passengers.