To order copies of Wounded Knee 1973: Still Bleeding from Amazon, click HERE. For signed copies or retain opportunities, send a message on the Contact page. 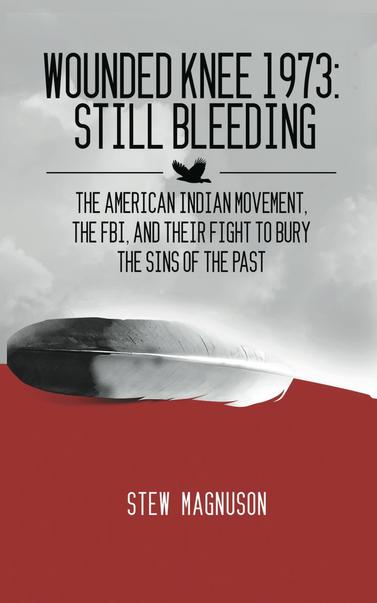 On Feb. 27, 1973, some 200 members of the American Indian Movement took over the tiny — but highly symbolic — hamlet of Wounded Knee, South Dakota, on the Pine Ridge Reservation. They squared off with the FBI and the federal government for 71 days, which made it the only armed insurrection on U.S. soil since the Civil War.
Thirty-nine years later, at a small liberal arts college in Sioux Falls, South Dakota, aging onetime AIM and FBI leaders sat in the same room for the first time, and accused each other of murder as they engaged in heated arguments and fought for their reputations and how history would view them.
Award-winning author Stew Magnuson has penned Wounded Knee 1973: Still Bleeding, a dual account of the occupation and the controversial conference that took place at Augustana College in April 2012, an event leading up the 40th anniversary of the occupation in 2013.

“As attention turned toward the meaning and impact of the incident as the 40th anniversary approaches, Wounded Knee 1973: Still Bleeding is intended to give readers an overview of the siege and the issues that still haunt the Pine Ridge Reservation.

The “Still Bleeding” part of the title refers to the anger that those who took part in the occupation and those who opposed it, still feel to this day as well as the deep divisions that the younger generation represented at the conference said remains on the reservation.

It also refers to the unsolved disappearance of Roy Robinson, and African-American civil rights activist who entered the occupied village and was never seen alive again. His widow Cheryl Buswell-Robinson attended the conference and made a plea for those with information on her presumed dead husband to come forward.

The occupation destroyed the small collection of homes, a trading post and museum and made refugees out of its white and mixed-blood Indian residents who were taken hostage, which Magnuson says has been whitewashed from history. The book includes first time interviews with the last two living former hostages, Adrienne Fritze and Jeanne Fritze.

Other participants at the conference include: AIM leaders Russell Means, Dennis Banks and Clyde Bellecourt. Squaring off with them were the former FBI Special Agent in Charge Joseph Trimbach, his son John, former Special Agent David Price along with victims of the violence that swept over the Pine Ridge Reservation in the 1970s.  These two sides despise each other (to put it mildly), and they engaged in several shouting matches. The academic conference that was supposed to look back at history became historic itself.


To order copies of Wounded Knee 1973: Still Bleeding from Amazon, click HERE. For signed copies or retain opportunities, send a message on the Contact page.